Weedon, an old English word, means “pagan shrine on a hill”. The pagan Anglo-Saxons settled in Buckinghamshire from the fifth century onwards, so the name possibly indicates a comparatively late survival of pagan practices.(1)

Archaeological surveys have found Neolithic to Bronze Age flints and Roman remains in various parts of the parish suggesting the possibility of a much earlier settlement.(2)

Although Weedon is mentioned in a will dated 944, it is not named in the Domesday Book of 1086, but is included in the three land-holdings listed for Hardwick. The largest of these was Hardwick Manor and the second is believed to have been called Weedon-in-the-Vale Manor in the 14th century and Kempton’s Fee in the 16th and 17th centuries. The smallest, on which may have stood a dovecot and windmills, may have become part of the Weedon manor.(3)

Descent of the Manors - Origin of the Two Weedon 'Ends'?

Hardwick Manor was inherited by two sisters in 1236 and from that date each half descended separately in ownership. In 1385, New College, Oxford acquired one half, with its base being at Weedon Lodge. Until parish boundary changes in 1886, Weedon Lodge, with 8 acres of land, was actually part of Wingrave parish, not Weedon.(4) The College still owns land at Weedon Hill.

The other half-manor was conveyed to Robert Lee of Quarrendon in 1522. A year later, he also acquired the Weedon-in-the-Vale manor.(5)  Lilies was the base of the Lees. This arrangement may account for the polyfocal layout of the village, with one centre at East End and the other at the High Street. The two parts are still separated by the field called The Closes.

The mound in Lilies Park beside the Buckingham Road may be all that remains of one of the windmills mentioned above. In 1692, Elizabeth, Countess of Lindsey, of Lilies and her son, Henry, Earl of Litchfield, granted two parcels of land to Leonard Sharp, miller of Aston Abbotts. A substantial windmill was to be built on one parcel, on the site of a former ancient mill, and on the other a little house for the miller. The Windmill Field or Nap is referred to in several “glebe terriers” (land surveys), including that of 1605, and a windmill is shown on the pre-enclosure map of Weedon, albeit on the opposite side of the main road. The position of the road may have changed, however.(6)

Each manor held its own manorial court which by the 1700s dealt predominantly with changes of tenants and the collection of monies due to the Lord of the Manor. The Lee manor let a number of farms and cottages, some of the latter with small amounts of land in the open fields and rights of pasture for two cows and six sheep.(7) A few cottages built on the manorial waste, for example in Stockaway, were allowed to remain for a nominal rent.(8)

The "Copyhold System" of Tenure

New College leased out College Farm (Weedon Lodge) but their remaining land was held by copyhold for ‘three lives’. A copyholder retained a copy of the entry made in the manorial court roll. He named two others to succeed him. Properties could stay in the same family for generations as long as they could afford the entry fines due on being admitted to the tenancy and for each life added. Many copyholds had been converted to leasehold during the 18th century, but this form of tenure continued in Weedon until the early 20th century, under the conservative management of New College. The Chestnuts, Lambsquay House, The Wheatsheaf and The Royal George, all dating from the 17th century, were copyhold properties.(9)

The land of both manors and about 138 acres of non-manorial freehold land lay intermixed in the three large open fields that surrounded the village. These fields were subdivided into named furlongs and each furlong into strips. Each year, one field lay fallow; one grew wheat and the other beans. Pasture was in short supply and the number of animals that could be kept was carefully regulated. There were also some old enclosed fields, for example Kirby’s, The Closes and Lammas Close.(10)

By the 18th century the open field system of farming was seen as inefficient and many parishes enclosed their fields by an act of parliament. The Weedon Act authorised the enclosure of allotments, by hedges and ditches, for the sole use of the owner or tenant. New roads were laid out including New Road and the Aston Abbotts Road, and some of the High Street was repositioned.

The Enclosure Award 1802 allotted 738 acres to New College, 502 acres to the Marquis of Buckingham (who bought the Weedon part of the Lee Manor in 1801) and 302 acres to the Church, in lieu of tithes.(11) Although the layout of Weedon was transformed by enclosure, the ridge and furrow clearly visible in many of the fields is evidence of mediaeval farming practices and has survived due to the conversion to pastoral farming after enclosure.


The Village Economy after Enclosure

Agriculture was still the major source of employment with most men working as labourers. Women and children supplemented the family income by straw-plaiting and lace-making, with 93 involved in these crafts in 1851. This figure dropped to 14 in 1881 due to the strong competition from foreign imports.(14) Many women left the village to search for work elsewhere. It was not until the early twentieth century that the crafts of blacksmith, tailor and baker that had made the village fairly self-sufficient disappeared. The last shop closed in 1990.

Lilies and the Rothschilds in Weedon 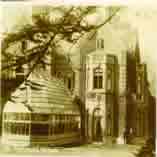 In 1848, the Buckinghams were forced to sell their land holdings in and around Aylesbury. Lord Nugent, the first Duke of Buckingham’s brother, bought the house and parkland. The remainder of the Weedon estate was purchased by Baron Anthony de Rothschild of Aston Clinton in 1849.(16) On Lord Nugent’s death in 1850, Lilies was inherited by Dr Connell, a relative of Nugent’s wife.

In 1869, Lilies house and grounds were bought by Henry Cazenove, a stockbroker from London. He had the old house pulled down and rebuilt in 1870.(17) Henry Cazenove died in 1894 and the house was put up for sale. It continued in private hands until 1939, when it was taken over by a firm of distillers. From 1946 it was used as a training centre for the Royal Bucks Hospital, but reverted to private ownership in 1969.(18) 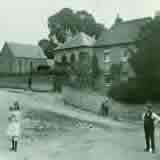 Entries in 19th century marriage registers show that many could not sign their name, but a number of attempts had been made to educate at least some of the children. A young woman ran a school in Weedon in 1712. A daily school commenced in 1831, in which twenty boys and girls were instructed at the expense of their parents. A Sunday school supported by voluntary contributions started in the same year. Dr Bridle founded two schools in Hardwick, in the late 18th century, one for boys and one for girls, and set up a trust to finance them.(19)

In 1873 Henry Cazenove of Lilies built an Infants School in Weedon, which commenced operating in November. Cazenove and the Rector shared the running costs. In January 1877, Mrs Cazenove gifted the schoolroom to the village and church services started on Sunday evenings. Mrs Cazenove continued to support the school until her death in 1905, but it is believed that the school closed in that year.(20) 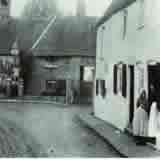 Another important influence on the lives of the villagers was Methodism and the building of the chapels, but they may not have been the first churches in Weedon.

The pre-enclosure map reveals the location of an old churchyard, which is mentioned in the glebe terrier of 1605. It lies partly under the High Street (Cooks Hill) and partly within the grounds of Lilies alongside the public footpath and is now a heavily wooded area. A shaded area on the map, next to the churchyard, may identify the site of a late Saxon wooden church, built by the then lord of the manor and with sufficient status to acquire burials. It was probably replaced by the more substantial stone building of St Mary’s in Hardwick prior to 1066.(21)

In 1772, a house was registered as a Methodist place of worship. It was not intended to replace the established church but aimed at a revival with open air preaching as the point of difference. Another house was licensed in 1813. In 1830, Reverend White recorded the number of people in the Methodist Society as nine.(22) 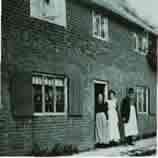 In 1894, local government introduced Parish Councils with councillors 'representing' church, chapel or public house. Street lighting was installed in the form of four oil lamps at strategic places. In the 1930s electricity came to the village but mains water and a sewage system had to wait a further 10 years.

The advent of motor transport made the village much more accessible. Many of the old cottages disappeared, replaced by council houses in the 1920s and a few new homes built by New College for their farm workers. Other housing, both private and council, followed after the Second World War.

Lack of village employment meant that most people commuted to work in Aylesbury, and latterly Milton Keynes and even London.

In the 1960s a plan to build the third London airport at nearby Cublington was defeated by strong local action, saving the rural tranquillity of Weedon village.(24)

researched and compiled by Julie Gibbs, 2010/11